Toledo a city to remember.

Toledo was capital of Spain until 1561 and is one of the oldest cities in Spain. The city lies 70 kilometers southwest of the current capital Madrid on a hill on the Tagus river.

You will experience Toledo as one large museum. Because for centuries the Hebrew, Mohammedan and Christian cultures lived brotherly next to each other, Toledo is sometimes called "The city of three cultures".

Toledo is one of the most beautiful cities in Spain, this city is also known for its production of swords because of the extremely strong ore that was extracted in this area. You will therefore find many stores in Toledo that offer these weapons for sale.

Add to your own tour

How to create your own tour

Next to the name of each route you will find a

For your motorbike, please select the motorbike of your choice on our motorbike rental page. By multiple participants you can add the number of motorbikes you will need.

at the top right to send the request and we will contact you as soon as possible. 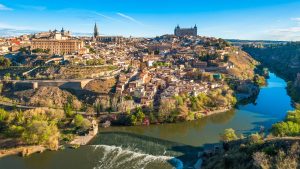 Extremadura - Guadalupe and get to know the Black Madonna.

Sleeping in the Eagle's Nest of Portugal !

The stories of Don Quixote and Sancho Panza always cause a smile.